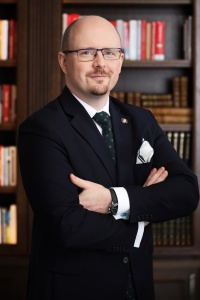 Lawyer. Co-founder and President of the Management Board of the Ordo Iuris Institute for Legal Culture. Partner at the law firm of Parchimowicz & Kwaśniewski.

In his law practice, Jerzy Kwaśniewski focuses on the protection of civil rights and freedoms, rights of the family and children's rights. He has represented citizens and civil organizations in numerous precedent-setting cases before national and international courts and tribunals, as well as in consultations at the invitation of international bodies such as the Venice Commission and the Office for Democratic Institutions and Human Rights of the OSCE. Jerzy Kwaśniewski advises national and international associations, foundations, co-operatives and entrepreneurs’ organizations and has supported the formation of numerous civil organizations participating in public debates in the field of ​​human rights. Until 2017, Jerzy Kwaśniewski was the President of the Management Board of the Polish Wine Council.

The architect and first director of the Ordo Iuris Institute Litigation Department, which yearly provides pro bono legal assistance in several hundred cases crucial for the protection of the rights of families and children, freedom of conscience and conscientious objection, freedom of speech of prolife campaigners, and the rights of those persecuted because of their attachment to the principles of the natural social order confirmed in the Polish Constitution.

Jerzy Kwaśniewski has been appointed to the advisory councils of four Ministers of Justice, including the Council for the Implementation of the Strategy of Modernization of the Judiciary in Poland and the Council for the Protection of Family Autonomy and Family Life. Member and secretary of the governmental Monitoring Council for the Prevention of Domestic Violence in the 3rd term of office from 2017. In 2016, deputy representative of the "Stop Abortion" Legislative Initiative Committee. Member of the International Association of Genocide Scholars since 2017. In March 2019, appointed by the Polish Episcopal Conference to the Council of the Bona Fama Foundation.

He and his wife have five children.