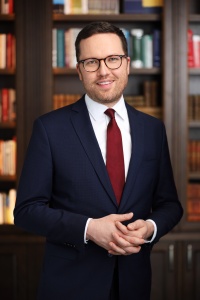 Doctor of laws, attorney-at-law, Vice-President of the Board of the Ordo Iuris Institute for Legal Culture, a human rights think tank based in Warsaw, academic lecturer, member of the European Economic and Social Committee. Vice-president of the Non-Governmental Initiatives Confederation, an independent network of organizations representing the civil society.

Tymoteusz Zych has authored numerous expert reports, legal opinions and academic papers in the field of human rights protection, family law, constitutional law and public international law. His opinions and expert reports have been used in the legislative process and accepted by both Polish and foreign courts and tribunals as well as international judicial Institutions. He has also drafted legal acts on the request of both public authorities and civil organizations.

Zych has been appointed as an expert in numerous bodies consulting on public policy. He has served as a member of consultative boards at the Ministry of Justice under four ministers of different political affiliations. Since 2015, he has been a member of the Family Life and Family Autonomy Council at the Ministry of Justice. Thanks to support from more than 25 NGOs, he has also been nominated to the council of the National Freedom Institute, which consults public policy regarding civil  organizations. He was also formal consultant of the Ministry of Entrepreneurship and Technology.

He has provided expertise in the field of human rights and the rule of law on the request of, among others, the Monitoring Committee of the Parliamentary Assembly of the Council of Europe, the LIBE and AFCO Commissions of the European Parliament, the OSCE Office for Democratic Institutions and Human Rights, the Venice Commission and the United States Department of State.

The purpose of this document is to present the main principles applied by the EU in its demographic policy and to confront them with actual expectations of European women and families. The first two parts of this paper describe the actions undertaken by the EU in order to fight the demographic crisis, and its gender equality policy. Consecutive parts will confront these main considerations with statistical data showing women’s aspirations as regards maternity and gainful employment as well as with scientific research on the consequences of nursery and preschool enrolment on children’s development.
Read more