The Ordo Iuris institute has submitted a special report to the Committee on the Rights of Persons with Disabilities in order to direct its attention to the issues surrounding the lives of disabled children before birth and the insufficient protection of their lives in the Polish legislation.

In the report submitted to the Committee on the Rights of Persons with Disabilities, the Ordo Iuris Institute addressed questions to the Polish government, which included the issue of discrimination of persons with disabilities in the prenatal stage of their life. The Institute urged the Polish government to provide unborn children with disabilities with the status of a patient thus fulfilling its constitutional obligation to guarantee a special care for children with prenatal disabilities.

In March this year, the Committee is going to present a list of issues to which the government of Poland ought to respond. In the opinion of the Ordo Iuris Institute, the protection of the disabled children’s life before birth requires a special interest and legislative changes in the Polish law.

Taking advantage of the possibility offered to non-governmental organizations to submit comments, the Ordo Iuris Institute, by sending these questions, reminded the Committee about the inalienable human dignity, which provides the basis for all other rights and freedoms recognized in international treaties, including the UN Convention on the Rights of Persons with Disabilities. This way the Ordo Iuris Institute called on Poland to comply with the conventional obligation to take all appropriate measures, including legislative ones, to amend or repeal the laws in force that discriminate against persons with disabilities.

In the submitted report, the Ordo Iuris Institute points out that the right of children with prenatal disabilities to equal treatment and non-discrimination as well as the right to life and the right to full enjoyment of all human rights and fundamental freedoms are still violated in Poland. The report not only recalls the regulations of international treaties of the UN and the case law of the Constitutional Tribunal of the Republic of Poland, but also takes notice of the last report of the Council of Ministers on the implementation and the effects of applying the Act of 7 January 1993 on Family Planning, Protection of the Human Fetus and the Conditions of the Admissibility of Termination of Pregnancy. It indicates that 1098 conceived children were legally killed in 2016, 1042 of them due to the suspicion of disability. The statistics published in the above report on the so-called legal abortions during the period 2002-2016 clearly indicate an increasing trend in abortions due to the suspicion of disability of a conceived child.

The situation we are facing, and which is confirmed by the official statistics, should not take place as it is incompatible with the international law, in particular, with the Convention on the Rights of Persons with Disabilities, which the Institute clearly emphasized in the report submitted to the UN - comments Rozalia Kielmans-Ratyńska, an analyst of the Ordo Iuris Institute.

The report was supported by a coalition of non-governmental organizations, including FAFCE – the Federation of Catholic Family Associations in Europe, Life Network Foundation Malta, SPUC– pro-life – the Society for the Protection of Unborn children, Fundacja Centrum Wspierania Inicjatyw dla Życia i Rodziny, Fundacja Mamy i Taty, Fundacja Pro-Prawo do Życia.

The European Parliament has adopted another radical resolution which includes gender ideology, accusations of alleged regressive treatment of women's rights and a condemnation of the US ban on the public funding of pro-abortion organisations, in addition to calling upon the EU to urgently ratify the Istanbul Convention. 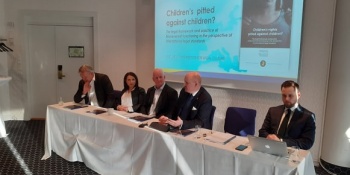