Two representatives of the European Commission sent a letter to the Marshals of the Lublin, Łódź, Małopolskie, Podkarpackie and Świętokrzyskie Provinces, in which they claim that the authorities of these regions discriminate against specific social groups by adopting pro-family resolutions. They criticise the Local Government Charter of the Rights of the Family implemented by the Regional Council of the Łódź Province and standpoints objecting to the promotion of LGBT ideology adopted by other provinces. Contrary to the facts, the Authors of the letter accuse local government authorities of establishing ‘LGBT-free zones’. They also want them to explain whether EU funds are spent in accordance with the EU’s ‘principle of non-discrimination’. The Ordo Iuris Institute has prepared a position in this matter.

The letter was written by Joost Korte – Director-General of the Directorate General for Employment, Social Affairs and Inclusion and Marc Lemaître – Director-General of the Directorate General for Regional and Urban Policy of the EC. The document states that Regional Councils of the aforementioned provinces have adopted ‘discriminatory declarations, positions or resolutions directed against LGBT persons’. Their alleged consequence would be ‘citizens’ fear of discrimination from institutions, beating by other citizens or job loss’. The EC representatives even think that local authorities ‘regarded the presence of LGBTI persons as undesirable in areas managed by them’.

The accusations made by the EC representatives are based on conjecture and assumptions. These include statements of alleged ‘fear of discrimination, beating or job loss’ or of ‘the risk of discrimination by beneficiaries of European funds’. Such resolutions of local authorities are consistent with the Polish law, which was confirmed by the Provincial Administrative Court in Kielce by issuing a decision of the 30th of September 2019 regarding the position adopted by the Regional Council of the Świętokrzyskie Province and rejecting the complaint directed against that position. Contrary to statements of the Authors of the letter, no Polish local government has declared itself as an ‘LGBT free zone’.

‘It is surprising that the Marshal of the Łódź Province was among the addressees of the letter. The Regional Council of that province has not adopted any position, declaration or resolution to which the text of the letter seems to refer. Its Authors may have meant the Local Government Charter of the Rights of the Family co-elaborated by the Ordo Iuris Institute, which the Regional Council of the Łódź Province adopted with significant amendments on the 28th of January 2020. The entire document is based on the axiology adopted in the Polish Constitution and affirms the principles expressed in it. Not once does the acronym ‘LGBT’ appear in it nor any kind of reference to sexual proclivities or preferences. Thus, a serious error must have occurred or the Authors of the letter have not read the document they criticise. ‘The letter signed by the European Commission representatives must be regarded as based on unsuccessful accusations and aimed at censoring the public debate in regional government communities,’ notes lawyer Rafał Dorosiński, Director of the Legal Analysis Centre of the Ordo Iuris Institute.

The other mentioned Regional Councils have adopted the standpoints in which they object to ‘activities aimed at promoting the ideology of LGBT movements’, clearly indicating that the resolutions concern controversial political demands. The questioned positions do not refer to European funds and programmes and have the character of a general ideological declaration not forming a basis for the imposition of any obligations or the granting or withdrawal of any rights. Thus, contrary to voices appearing in the public debate, they cannot be a basis for the withdrawal of EU funds. The resolutions do not create new ones and do not annul the existing legal relationships. Therefore, they are a legitimate voice in the public debate concerning the demands of LGBT organisations.

Ordo Iuris lawyers have taken legal action against the film director Agnieszka Holland and the leftist MP Anna Maria Żukowska. They have publicly slandered the Institute, claiming its actions are “fascist”.

Demands of radical ideological circles are gaining support in the United Nations. 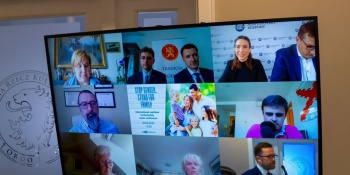